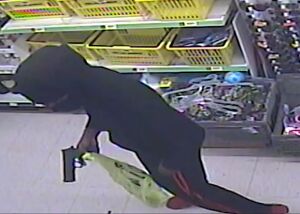 The Forney Police Department is asking the public for information about two men who are suspected of robbing a Dollar General store at 410 W. Broad St.Two Black males with handguns entered thestore at about 10:15 p.m. on Oct. 24, taking cash from the register.

One suspect removed children who were inside a vehicle in the parking lot and forced them inside the store. A single shot was fired into the ceiling by one of the suspects. No injurieswere reported, and Forney Police Investigators are working with other law enforcement jurisdictions who have recently experienced similar offenses. Police said these photos are from surveillance footage during the offense and they appreciate any information about the suspects.

If anyone has any additional information about this or any other incident, contact the Forney Police Department Criminal Investigations Division at 972-564-7607. Information can be left anonymously at Kaufman County Crime Stoppers at877-847-7522 or at http://kaufmancountycrimestoppers.org/. If that information leads to an arrest, a reward could be granted to the caller.