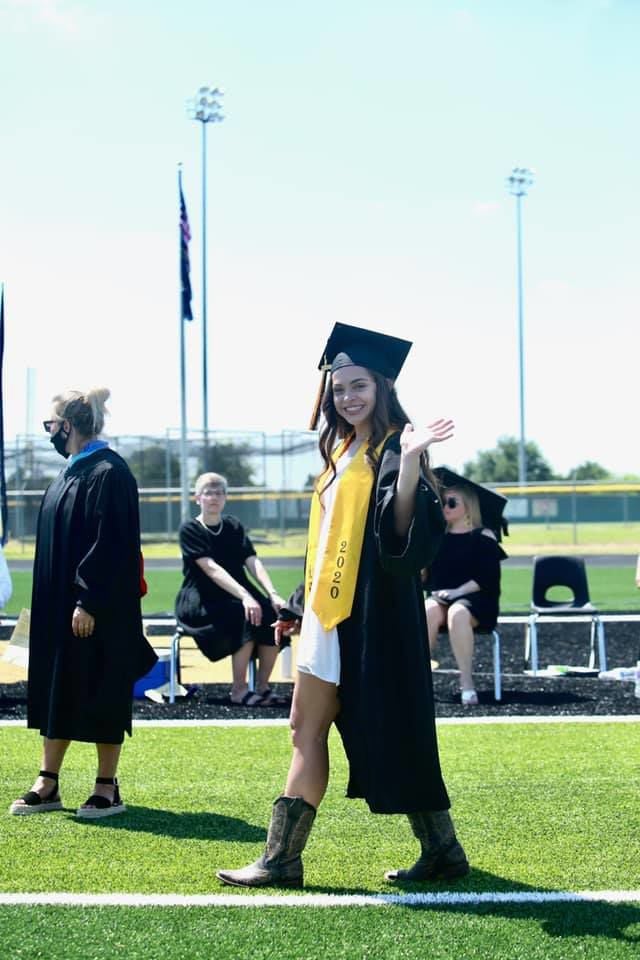 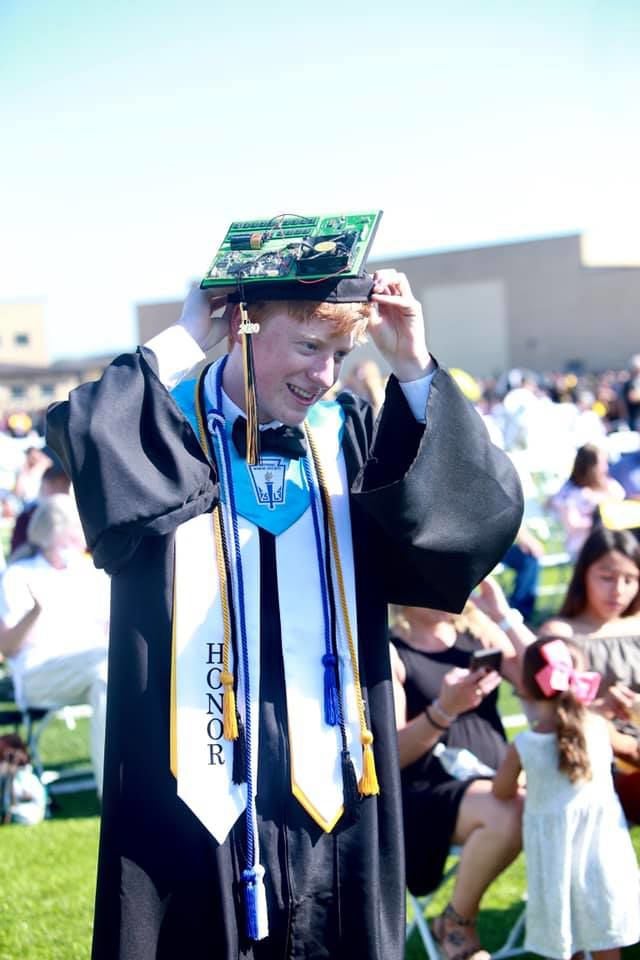 Jeb Williamson adjusts his circuit board-decorated mortarboard as he prepares to accept his diploma.

Jeb Williamson adjusts his circuit board-decorated mortarboard as he prepares to accept his diploma.

Kaufman High School performed its much awaited graduation ceremony for the senior class of 2020 on Saturday, June 6. Similar to Scurry-Rosser and Crandall, Kaufman held its ceremony at the Kaufman Lions Stadium in order to allow appropriate social distancing due to the risk of the coronavirus. Students gathered at the Lions Stadium at 10 a.m., as their family and friends watched from the bleachers. While the number of guests allowed at the event was limited, the ceremony was also intended to be streamed live via social media. Ultimately, the live stream was unsuccessful due to technical issues.

During his introductory speech, Principal Gavin Eastep alluded to the less-than-normal year that students have experienced.

Eastep acknowledged the strength and tenacity of the students for pressing forward during an exceptionally challenging year, which included suddenly switching to at-home education.

“Throughout the last couple months I’ve been very impressed by the poise and resilience of this senior class, as demonstrated. Reflecting back on that time I asked myself ‘how are they staying so calm?’ But then I realized; this class is full of individuals who were forced to be resilient in times of crisis, from the very beginning of their existence. This class is full of young men and women whose foundation was built on overcoming adversity in the faces of uncertainty.”

But students, faculty, and guests had another obstacle to overcome: the Texas heat. With clear skies, 90-plus degree weather, and an abundance of black gowns being worn, attendees were visibly uncomfortable as the sun beat down upon them. As time passed, several people in the crowd became overwhelmed by the heat, ultimately requiring medical attention. At one point, Eastep briefly interrupted his speech, saying “Can we have medical personnel down front please?” Ambulances arrived on scene to assist the affected individuals, and KISD staff responded by handing out water to anyone in need.

Senior Class President Gavin Stacks spoke first, thanking his family and teachers, speaking of the bonds he developed with his classmates, and encouraging others to be the best version of themselves possible. He closed the speech, saying “be brave, be gracious, be generous, love God and love people. Thank you.”

Salutatorian Christian Rivera was unable to attend the ceremony and asked classmate Jeb Williamson to deliver a speech in his place. Upon reaching the stage, Williamson stated “I’m not wearing my hat because it’s really hot.” Rivera quoted Clive Staples Lewis, who said, “You can’t go back and change the beginning, but you can start where you are and change the ending.” He encouraged his classmates not to dwell on their past, and to take action and responsibility for their actions in the present and future. “I accepted my past, made changes in my present and ultimately created a brighter future for myself,” Rivera said.

Though Rivera could not be in attendance, Valedictorian Harrison Lowder video chatted with him while on stage, turning the phone to the crowd, saying “We love you, we really wish that you could be here today, and we hope that everything is going well with you.”

Lowder also spoke of overcoming the unusual and challenging school year. “While we definitely did not get to have a normal senior year, we had one that will be remembered for a long time to come,” Lawder said. He continued, issuing a message of encouragement. “If we can make it through a worldwide pandemic, what's stopping us from having a successful future? Nothing!”

Before completing his speech, Lowder joked: “To my fellow classmates, once I am done with my speech, make sure you pick up the pace and walk across this stage. It’s really hot, and I’m pretty sure y’all don’t want to see me strip out of this gown.” After walking the stage, most students immediately shed their cap and gown, appearing overwhelmed by the heat.

While the year has been full of surprises for the class of 2020, including a final challenge in the form of sweltering heat, students can at last rest easy and feel proud knowing their time at Kaufman High School has officially been completed.